A week before the 7th February 1891, Aaron Kosminski was sent to Mile End Workhouse shortly after the attack on his own sister with a knife. He was then sent to Colney Hatch Asylum suffering with a form of disorder diagnosed at the time known as mania. No member of his family challenged this decision and finally the brutal murderer regarded as Jack the Ripper would never taste freedom again.

Colney Hatch Asylum was opened at Friern Barnet in July 1851 as the second pauper lunatic asylum for the county of Middlesex. In 1851 Colney Hatch, designed in the Italianate style by S.W.Dawkes, with 1250 beds was the largest and most modern institution of its kind in Europe. Within ten years it was enlarged to take 2,000 patients. It had its own cemetery (closed in 1873 after which the patients were buried in the Great Northern Cemetery), its own farm on which many patients were employed, its own water supply, and its own sewage works built after the local residents complained of untreated sewage from the asylum flowing in to Pym’s Brook.

On the creation of the County of London in 1889 Colney Hatch Asylum was transferred from the control of the Middlesex Justices to the London County Council, although it remained geographically within the administrative county of Middlesex. The need for more accommodation for lunatics led to the construction in 1896 of a temporary wood and iron building for 320 chronic and infirm female patients in five dormitories. This was destroyed by fire in 1903 with the loss of 51 lives. Between 1908 and 1913 seven permanent brick villas were built, one for behavioural disordered subnormal and epileptic boys, two with verandas for tubercular and dysenteric cases, and the remainder for women who had survived the fire.

In 1912 a disused carpenters shop and stores at the railway siding were converted into additional accommodation for male patients.

Construction of a male admission villa in 1927 and a female nurse’s home in 1937 freeing 89 beds for female patients brought the number of patients to its highest total of almost 2,700. In 1937 it was renamed Friern Hospital. Patients were admitted from Holborn, Islington, St Marylebone, St Pancras and Shoreditch. Jewish Patients from the whole of the county of London were as far as possible congregated at Friern, which provided special arrangements for the preparation of food and religious ministrations. The staff included nine full time doctors, 494 nurses, and 271 probationers.

The living conditions inside the asylum were irreparably decrepit.

The separate sleeping quarters measured 9ft by 6ft 6 inches in length and breadth and between 11ft to 12ft 6inches in height. The dormitories measured 48ft superficial approximately giving each resident 576 cubic feet. They were poorly heated in the winter and poorly ventilated so became overheated in the summer. The sanitation was virtually none existent which only added to the very poor, rancid and foul smelling, cramped, and squalid living conditions.

In the Middlesex County Lunatic Asylum Colney Hatch Asylum register of admissions, males No3 volume, lays the grim record of Aaron Kosminski’s incarceration. The details are: 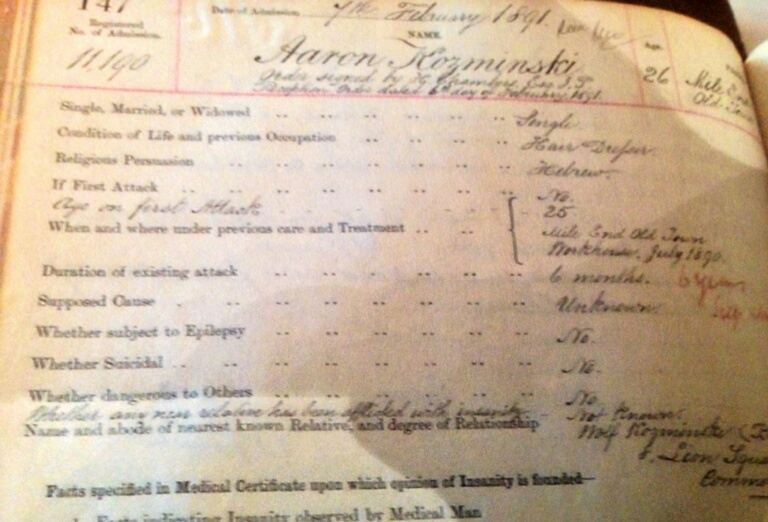 In the register of Admissions, on page 147,  Aaron Kosminski’s address was given as 16 Greenfield Street Mile End, Mile End Old Town, The name and abode of his nearest known relative, and degree of relationship was: 8 Sion square, Commercial Road, Wolf Kosminski, (brother).

When and where under previous care and treatment: Mile End Old Town, July 1890.

Facts Specified in Medical Certificate upon which opinion of insanity is founded:

In the documents of the observations section for Aaron Kosminski are the following:

Feb 15 – Is rather illegible to deal with on account of the illegible character of his illegible. Reported to the father the other day as his “instinct”.

Jan 9 – Incoherent, at times excited and violent – a few days ago he took up a chair and attempted to strike the charge attendant, apathetic as a rule, and refuses to occupy himself in any way : habits cleanly, health fan.

Nov 17 – Quiet and well behaved. Only speaks German. Does no work.

It was at this time, Aaron Kosminski was admitted into Leavesden Hospital. There is no record of any visit from any member of his family during his incarceration there.