Using DNA evidence, Russell Edwards is able to conclusively name Jack the Ripper as Polish born Aaron Kosminski.  The biggest murder mystery of all time has now been solved, thanks to DNA on a Victorian shawl and forensic science

In 2007, businessman Russell Edwards bought a Victorian shawl at an auction. 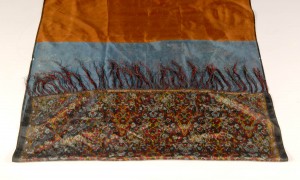 The shawl was large – over 7 feet long, made of silk, obviously very old, and damaged, with pieces missing. The shawl had been taken by a policeman from the murder scene of Jack the Ripper’s fourth victim, Catherine Eddowes, on 30 September 1888.  Since then, aside from a few years in Scotland Yard’s Black Museum, it had been safely stored away by the direct descendants of that policeman.

In his book, Naming Jack the Ripper, to be published on Tuesday 9 September, Russell Edwards details the years of dedicated historical and scientific research that have gone into proving without doubt that Aaron Kosminski was Jack the Ripper.

His exhaustive historical research coupled with cutting-edge DNA testing undertaken by leading forensic geneticist, Dr Jari Louhelainen of Liverpool John Moores University, have linked the shawl with the descendants of Kosminski and his victim.   Crucially, DNA taken from blood and semen stains on the shawl matched the descendants of both Catherine Eddowes and her killer.

The key that began to unlock the mystery was the shawl’s distinctive pattern – Michaelmas daisies. Russell Edwards remembered that police and newspaper reports at the time of Catherine Eddowes’s murder had referenced an item of clothing with a similar pattern.   It was that shawl that was up for sale at a Suffolk auction house in 2007.

The shawl’s owner told Russell that a London policeman, Acting Sergeant Amos Simpson who was on duty the night of Eddowes’s death, asked if he could have it for his dressmaker wife. Understandably, Simpson’s wife reacted in horror at the thought of using a bloodstained shawl. It was stowed safely away, never washed, and passed down from generation to generation.

This family history could never be definitive proof of a link to Catherine Eddowes, despite a letter confirming its provenance. Only scientific analysis of the stains on the shawl could prove without doubt its presence at the murder.

As Russell Edwards continued his research into the story of Jack the Ripper, Dr Jari Louhelainen, Senior Lecturer in Molecular Biology, began his painstaking examination of the shawl.

Primary analysis by Dr Louhelainen showed the dark stains on the shawl were not just blood but were ‘consistent with arterial blood spatter caused by slashing’. A large dark stain could, he suggested, also be evidence of split body parts (some of Catherine Eddowes’s organs, including her left kidney, were removed during her brutal murder). White stains fluoresced under UV light suggesting the presence of seminal fluid.

So began the three year scientific analysis of the shawl and the search for the descendants of Catherine Eddowes and the man who Russell Edwards – and many others, including the police officers who originally investigated the case and Scotland Yard  –  suspected was Jack the Ripper. In the end, it was DNA coding that confirmed the authenticity of the shawl and the identity of the killer.

At the same time, findings by molecular chemist, Dr Fyaz Ismail, who tested the blue dye on the shawl using nuclear magnetic resonance, suggested that the shawl was Russian and predates the murders. This backed up Russell Edwards’s theory that the shawl, which was of particularly fine quality, belonged to Kosminski and not to Eddowes, who was unlikely to have owned such a costly item.  The region of Poland where Kosminski lived was under Russian control and would have traded with its neighbour.

The third part of the jigsaw focussed on samples of the seminal fluid from the shawl. Dr David Miller, Reader in Molecular Andrology at the University of Leeds managed to find the cells from which the DNA was isolated.  All that remained was for Russell Edwards to find a descendant of Kosminski through the female line.

The woman Russell traced, with the help of genealogists, offered samples of her DNA to make the crucial comparison. Seven years after Russell Edwards had bought the shawl, they finally had a match: Dr Jari Louhelainen matched DNA from the semen stains on the shawl to the descendant of Aaron Kosminski.

The circle is now complete. One of the greatest unsolved crime mysteries of all time has been solved through cutting edge science, historical research and a great deal of determination and good fortune. Aaron Kosminski – Jack the Ripper – has been placed, once and for all, at the scene of Catherine Eddowes’s horrific murder.

Read more in the Mail on Sunday and The Mirror

Add some widgets on this sidebar.